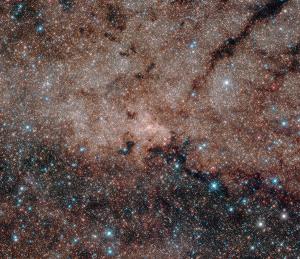 A half-million stars blaze in the center of the Milky Way Galaxy in this view from Hubble Space Telescope. Various studies put the distance to the galaxy's hub at 23,000 to 30,000 light-years. A black hole about four million times the mass of the Sun lies at the center, surrounded by vast clouds of stars. [NASA/ESA/Hubble Heritage Team (STScI/AURA)]

The downtown of a major city is bold, bright, busy — and crowded. And the same thing applies to galaxies. The downtown of our home galaxy, for example, is packed with millions of stars. Some of them are among the biggest and brightest in the entire Milky Way. And new stars are entering the picture at an impressive rate.

The hub of the galaxy’s heart is a black hole about four million times the mass of the Sun. It’s encircled by a faint disk of hot gas. Many stars orbit the black hole, including some that come especially close; more about that tomorrow.

Several giant star clusters are within a couple of hundred light-years of the black hole. One of them is one of the busiest nurseries in the galaxy, giving birth to many new stars. Another is the densest cluster in the galaxy, with stars packed millions of times more tightly than out here in the suburbs. And yet another contains several stars that are at least a million times brighter than the Sun — brilliant lights for “downtown” Milky Way.

In the Middle | StarDate Online