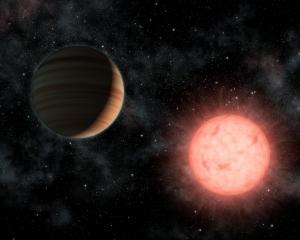 A giant planet orbits a small star, known as a red dwarf, in this artist's concept. Some astronomers have hypothesized that such small stars acquire such big planets through gravitational exchanges with other stars. One example may be the star system Gliese 3512, which consists of a planet at least half as massive as Jupiter, the giant of our own solar system, plus a tiny, feeble star. [NASA/JPL]

The brilliant planet Jupiter leads the Moon across the sky late tonight. It’s to the upper right of the Moon as they climb into good view, after midnight.

Jupiter is the largest planet in the solar system. It’s about five times as far from the Sun as Earth is. But it probably hasn’t always been at that distance. Models show that it probably moved much closer to the Sun early on, then backed away.

Jupiter-sized planets in some other star systems may have moved even more. In fact, it’s possible that they switched stars.

A recent study looked at a system known as Gliese 3512. It consists of a tiny, feeble star plus a planet at least half as massive as Jupiter. The problem is, there doesn’t appear to be a way for such a heavy planet to form around such a little star. The gravity of the star wouldn’t allow enough material to come together to make such a world.

So researchers suggested another way for a little star to get a big planet: a swap with another star. In the crowded confines of a young star cluster, stars frequently pass close to each other. If a small star flies near a Sun-like star with a Jupiter-like planet, the planet could switch partners — it could leave its parent star behind and be adopted by the smaller star.

Gliese 3512 isn’t the only system where a small star has a big planet. That suggests that planet exchanges could be common, with planets frequently switching stars inside busy clusters.