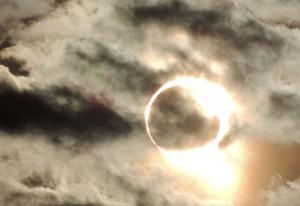 A “ring of fire” will pass across the top of the world early tomorrow — an annular solar eclipse. It occurs as the new Moon crosses between Earth and the Sun, so the shadow of the Moon passes across our planet. A partial eclipse will be visible across a wedge of the United States.

An annular eclipse takes place when the Moon is a little farther from Earth than average. That makes it appear a little smaller than average, so it’s not quite wide enough to cover the entire solar disk, as it does during a total eclipse. As a result, a bright “ring of fire” surrounds the intervening Moon. For this eclipse, the Moon will cover almost 90 percent of the Sun.

The annular eclipse begins over southern Ontario at 5:50 a.m. local time. The lunar shadow will move northwestward, then curl over the north pole before disappearing over Siberia. The path of the annular eclipse will be up to about 330 miles wide. And the Moon will remain encircled by the Sun for a maximum of less than four minutes.

A partial eclipse will cover a wider area, with the Moon covering at least a fraction of the Sun. This portion of the eclipse will be visible as the Sun rises over roughly the northeastern third of the United States. The Sun will be too bright to look at directly, though, so use eclipse glasses or other safe screening to protect your eyes. Or you can watch the entire event online.

Tomorrow: a telescope that’s on the ground and in space.