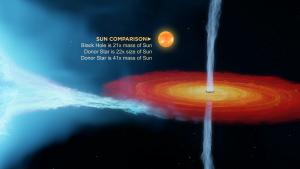 An artist's concept depicts Cygnus X-1, the first confirmed black hole ever discovered. The black hole is stealing gas from a giant blue companion star. The gas forms a disk around the black hole. Some of the gas escapes the black hole and is flung back into space in the form of high-speed jets from the black hole's poles. Recent research indicated that the system is farther than expected, which means the black hole and its companion are larger and more massive than earlier research had indicated. [International Centre for Radio Astronomy Research]

The first black hole ever discovered has gotten bigger. In part, that’s because it’s pulling in gas from a companion. Mainly, though, it’s because astronomers recently found that it’s farther away than expected. That means it’s more massive than thought, too.

Cygnus X-1 was discovered by an X-ray detector lofted into space in 1964. In fact, its name indicates that it was the first source of X-rays discovered in the constellation Cygnus.

Over the years, astronomers figured out its true nature. It’s a binary — two objects bound by gravity. One of them is a hot, massive star. The other is a black hole — the corpse of a star that was more impressive than its companion. The black hole pulls gas from the companion, forming a disk around the black hole. The disk is extremely hot, so it emits a lot of energy — especially X-rays.

A team recently used an array of radio telescopes to measure the system. The team compared those observations to similar ones made a decade earlier. That produced the best measurement of the distance to Cygnus X-1: 7200 light-years.

From that, the team recalculated the system’s details. The companion is about 40 times the mass of the Sun, while the black hole is about 20 times the Sun’s mass — the heavy corpse of a once-mighty star.

Cygnus is low in the northeast at nightfall. Although Cygnus X-1 is too faint to see, it’s about half way between the swan’s bill and the intersection of its body and wings.