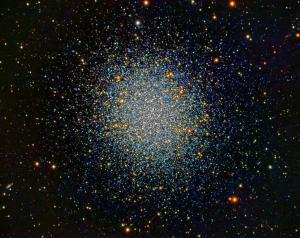 Thousands of stars speckle this view of M13, the Hercules Cluster. It is one of the largest clusters in the galaxy, housing hundreds of thousands of stars, many of which are at least 12 billion years old. The cluster is roughly 25,000 light-years from Earth, in the constellation Hercules. [KuriousGeorge/Wikipedia]

A planet in the heart of M13, the Hercules Cluster, would never see the dark of night. The cluster contains hundreds of thousands of stars, all packed into a ball only about 150 light-years across. So while the Sun’s nearest neighbor is more than four light-years away, a star in M13 would have thousands of neighbors that were much closer. That means the night sky of a planet in the cluster would boast thousands of stars that are more brilliant than the brightest star in our own night sky.

M13 is in the constellation Hercules, which is well up in the east and northeast as night falls. Look for a lopsided square of four modestly bright stars known as the Keystone. M13 lies between the two stars at the top of the Keystone. Under especially dark skies, it’s just visible to the unaided eye as a faint, fuzzy star.

M13 is a globular cluster. Such clusters were born at the same time as the galaxy itself. So the stars in a globular are perhaps 12 billion years old or older — almost three times the age of the Sun.

Tomorrow: a black hole gets heavier.