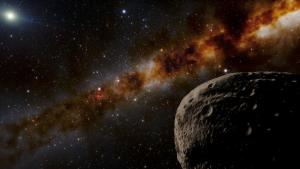 This artist's concept depicts an object informally known as Farfarout. At roughly 132 times the Earth-Sun distance, it is the most remote body yet seen in the solar system. Estimates say it is roughly 250 miles in diameter, or roughly one-sixth the diameter of Pluto, the best-known object in the outer solar system. It was discovered in 2019, and astronomers say it takes about 1,000 years to orbit the Sun. It recently received the formal designation 2018 AG37. It will receive a proper name later. [NOIRLab/NSF/AURA/J. da Silva]

If astronomy gave a “truth-in-naming” award, it would have to go to the object known as FarFarOut. It’s the most remote body in the solar system yet seen — more than 130 times the distance from Earth to the Sun.

FarFarOut is one of almost 3,000 objects discovered beyond the orbit of Neptune, the most remote of the Sun’s major planets. Most of them are pretty small, but a few are bigger chunks of ice and rock. The biggest is Pluto, which is about 1400 miles in diameter.

FarFarOut probably ranks in the top hundred or so. Estimates put its diameter at about 250 miles. It’s so far away, though, that it’s hard to tell. Astronomers don’t have the details they need to reveal its true size.

FarFarOut was discovered in January 2019, in observations made a year earlier. Astronomers have tracked it a few times since then. From those observations, they say that it takes about a thousand years to orbit the Sun.

Its orbit is quite lopsided. At its closest, FarFarOut dips inside the orbit of Neptune. Encounters with the giant planet probably sculpted FarFarOut’s orbit, as Neptune gave the little object a boost.

Although FarFarOut is a great name, it’s only temporary. Astronomers recently gave it a formal designation — 2018 AG37. Later on, they’ll give it a formal proper name — a new name for an object far, far out in space.

We’ll talk about a search for a bigger object in the outer solar system tomorrow.