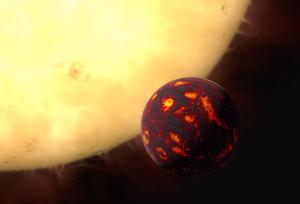 55 Cancri e, which is depicted in this artist's concept, is one of more than 1,300 "super-Earths" discovered in other star systems. Such planets are larger than Earth but smaller than any of the solar system's giant planets. Such worlds probably are rocky, as Earth is. Some of the super-Earths are at the distance from their parent stars where temperatures are most comfortable for life. That's not the case for 55 Cancri e, though. The planet (lower right), which was discovered with the Hobby-Eberly Telescope at McDonald Observatory, is so close to its star that its surface may be an ocean of molten rock. [ESA-Hubble/M. Kornmesser]

A super-Earth is a rocky planet that’s up to a few times bigger and heavier than Earth. A sub-Neptune is a few times larger than that. It may have a rocky core surrounded by a thick atmosphere, like Neptune, one of the giant planets of our own solar system. Searches have revealed hundreds of examples of both classes of planet.

Astronomers have pondered how the two types form. And some recent studies suggest that super-Earths might form from sub-Neptunes.

The studies show that super-Earths are more common in older star systems than in younger ones. Since the planets in the studies are quite close to their host stars, that could mean that, given time, a star can turn a sub-Neptune into a super-Earth. Travis Berger, a member of one of the study teams, explained how in a press briefing in January.

BERGER: You start off with a sub-Neptune, you hit it with a bunch of high-energy radiation—and lots of it—over billions of years, and eventually you can strip off its atmosphere and make it become a super-Earth.

That might not be the only way to make a super-Earth. But it could be one way to sculpt some of the worlds in other star systems.