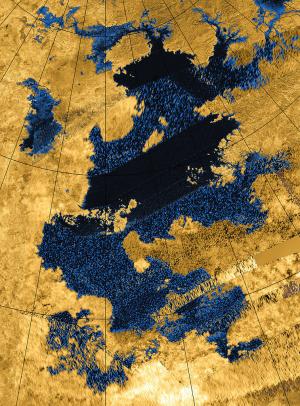 The largest sea on Titan, the biggest moon of Saturn, fills most of this radar image from the Cassini spacecraft. Mare Kraken covers roughly twice the area of all the Great Lakes combined, and may be a thousand feet (300 meters) deep or more. Because Titan's surface is extremely cold, however, the sea is filled not with water, but with with liquid methane and ethane. Titan is covered by a thick orange haze, so scientists compiled this false-color image from observations by Cassini's radar, which could penetrate the haze. [NASA/JPL/Agenzia Spaziale Italiana/USGS]

Legend says that in centuries past, Scandinavian sailors plying the frigid waters between Norway and Iceland kept a close lookout for a monster from the deep: the kraken. It was said to be big enough to swallow men and ships alike.

Sailors may not find such a creature in the largest sea on the largest moon of Saturn — the Kraken Sea. But there’s plenty of room for it to hide in. Parts of the sea may be more than a thousand feet deep.

The Kraken Sea is on Titan, a world that’s half-again the size of our moon. It’s blanketed by a cold, thick atmosphere that’s topped by an organic haze. Liquid fills rivers, lakes, and seas on its surface — liquid hydrocarbons.

The Kraken Sea covers an area that’s about twice the size of all the Great Lakes combined. As the Cassini spacecraft neared the end of its mission a few years ago, scientists used its radar to peer through Titan’s haze and map the sea. They revealed the results of that scan a few months ago.

The beam reflected from both the surface and the bottom of the sea. The timing, and the way the beam was reflected, showed that the sea is mostly methane, chilled to 300 degrees below zero. And it revealed the depth of the sea: up to a thousand feet or more — a perfect place to hide a sea monster.

Saturn stands to the upper left of our moon at first light tomorrow. It looks like a bright golden star. Brighter Jupiter is off to their left. More about the giant planets tomorrow.