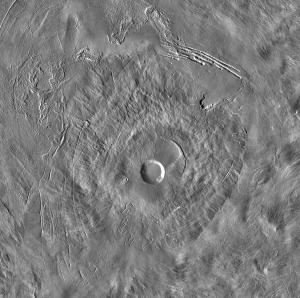 Pavonis Mons, one of the tallest mountains on Mars, towers about nine miles above the surrounding landscape. The extinct volcano lies along the equator, making it a good spot to anchor a space elevator, which could transport people and goods between the surface and space. Such a technology is many decades in the future, though. [NASA/JPL/Arizona State]

If science fiction has its way, future travelers to Mars might arrive on a giant volcano. Pavonis Mons is miles high, and it lies along the equator. That makes it a perfect spot for a space elevator — a massive chord connecting Mars and a platform thousands of miles out in space. People and cargo could arrive at the platform, then enter elevator cars for the long ride down.

Pavonis Mons is the middle peak in a chain of three giant volcanoes. It’s about nine miles high and a couple of hundred miles wide. It’s topped by two large craters from which lava once flowed. The bigger of the two is also older — it’s mostly filled with dust. The other is younger and sharper.

Pavonis Mons and the other volcanoes built up as thick lava flowed down their flanks. The lava could have flowed for hundreds of millions of years or longer, building the mountains to giant proportions. There’s no evidence that Pavonis Mons is active today. But it could have been active within the last few million years.

If people ever do arrive at Pavonis Mons from an elevator, the mountain even offers a few places to stay. Spacecraft have photographed the entrances to deep caves that tunnel into the mountain. If they could be sealed up, they might provide a comfortable habitat — an arrival spot on a Martian volcano.

Mars follows the Moon down the sky this evening. The planet looks like a fairly bright orange star.