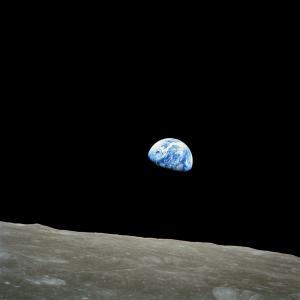 Earth looms large above the surface of the Moon in this photograph from the Apollo 8 mission in 1968. It would have appeared even larger when the Moon was born because the two bodies were much closer together. The gravitational pull between them would have been stronger, creating significant tides inside Earth, perhaps warming our planet enough to significantly increase its surface temperature, according to recent research. [NASA]

Aldebaran, the bright orange eye of the bull, accompanies the Moon down the western sky this evening. It’s to the left of the Moon, and it’s easy to pick out.

Thousands of years ago, Aldebaran wasn’t dropping from sight in the evening sky at this time of year. Instead, it was just climbing into view in the morning sky. And some cultures might have paid close attention to that first appearance.

About 6,000 years ago, the cultures of central Portugal built many stone monuments. Some of them consisted of a central chamber made from tall slabs of granite, with a long, narrow entryway. Researchers have concluded that many of those entryways aligned with the sunrise during late spring. That was when the tribes were moving their sheep and goats to higher ground for the summer.

But some of the passageways have different alignments. Instead of the sunrise, they face the rising points of Aldebaran and Betelgeuse, the bright orange shoulder of Orion. Aldebaran rose first, in late April — a more likely time to be heading for the summer grounds. So one researcher has concluded that those monuments could have served as observatories. An observer sat inside the main chamber and looked out through the entryway. When he first saw Aldebaran climb into view in the bright dawn twilight, it was time to move — nudged to higher ground by the eye of the bull.

We’ll talk about the Moon and another orange companion tomorrow.