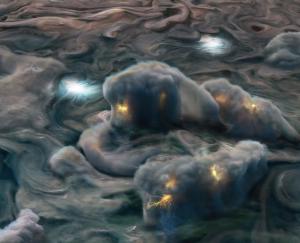 This artist's concept shows powerful lightning bolts in high clouds on Jupiter, the solar system's largest planet, as detected by the orbiting Juno spacecraft. Previous craft had seen lightning at greater depths in the planet's turbulent atmosphere, but Juno's detection was the first at such high altitudes. Juno's observations also suggest that such high storm clouds produce "mushballs" -- hailstones made of a mixture of water and ammonia, which keeps them mushy at lower temperatures. [NASA/JPL/SwRI/MSSS/Gerald Eichstädt/Heidi N. Becker/Koji Kuramura]

Jupiter may produce its own snowballs. And getting hit by one would sting — not just from the cold or the impact, but because the snowballs contain ammonia.

Jupiter is a giant ball of gas that’s topped by clouds. The clouds are made of ammonia, water, and other compounds. And they produce lightning.

Until recently, spacecraft had seen only “super-bolts” of lightning. But Juno, which is orbiting the planet, has photographed bolts comparable to the ones here on Earth. Those may be created much higher in the clouds, where it’s too cold for liquid water. But the high clouds contain ammonia. Crystals of water ice can be blown into those clouds, with some interesting results, says Heidi Becker, a Juno scientist:

BECKER: And when those crystals hit the ammonia vapor, the ammonia acts like an antifreeze and lowers the melting point of the water, letting it become a new ammonia-water liquid kind of like a Windex. So you can almost think of it like Windex raindrops colliding with water-ice crystals and charging up to create the conditions necessary for lightning.

The ammonia and water mix to form hailstones. As they cycle through the clouds they get bigger, creating “mushballs.” Eventually, they get heavy enough to fall out of the clouds at hundreds of miles per hour — high-speed mushballs on a giant planet.

Look for Jupiter above the Moon at first light tomorrow. It looks like a bright star. The fainter planet Saturn stands to their upper right.