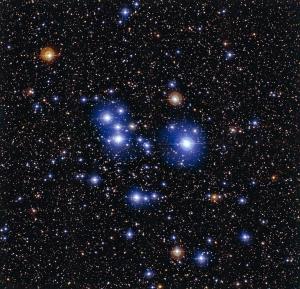 Brilliant blue stars highlight this view of Messier 47, a star cluster roughly 1,600 light-years from Earth in the southern constellation Puppis. These stars are young, hot, and massive. They will live short lives, however, quickly evolving into red giants or supergiants (a few massive young stars have already done so), then expiring. M47 is near another cluster, Messier 46. Both of them appear not far from Sirius, the brightest star in the night sky. [European Southern Observatory]

Early 1771 was a busy time for Charles Messier. The French astronomer was most interested in discovering comets. To make the process faster, he compiled a list of objects that resembled comets: galaxies, gas clouds, and star clusters. He could ignore the objects on the list, reducing the number of false alarms.

And 250 years ago, he recorded four of them. Two of them are clusters in the constellation Puppis: Messier 46 and 47. They stand side by side — so close together that they’re in the same field of view through binoculars.

M47 is the brighter of the two. It’s about 1600 light-years away, and consists of several hundred stars. The cluster is still pretty young, so some of its more massive stars haven’t yet had time to burn out. They’re especially bright, and they shine blue-white, so they overpower most of the rest of the cluster. A couple of massive stars are at the ends of their normal lifetimes. They’ve gotten bigger and cooler, so they look red or orange.

The clusters are in the south as night falls. They’re not far to the upper left of Sirius, the brightest star in the night sky. Messier 46 stands close to the left of its brighter neighbor.