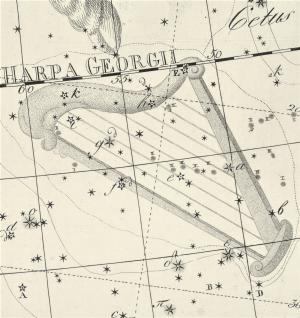 From the late 1600s through the early 1800s, European astronomers went on a constellation binge. They drew dozens of new ones, usually in areas of the sky with few bright stars. Many of their creations are still in use. But many others have vanished.

Johannes Hevelius, for example, drew a few constellations in the late 1600s. One was the northern fly. It was adapted from an earlier constellation, the bee. Another was Cerberus — a three-headed snake in the hands of Hercules. Both of those defunct constellations are low in the west at nightfall, well below the bright star Aldebaran.

German astronomer Johann Bode drew seven new constellations in an 1801 atlas. One honored the electric generator, while another honored the creation of the printing press more than three centuries earlier. Its stars were later absorbed into Puppis, the poop deck, which is in the south at nightfall. None of Bode’s creations is still around. But one of them gave its name to the Quadrantid meteor shower.

Another German, Father Maximilian Hell, drew the constellation George’s Harp in the 1700s. It honored King George III of England, the patron of astronomer William Herschel.

Most of the new creations quickly fell out of use. And in 1930, astronomers adopted a list of official constellations, which dropped many of the creations of the previous three centuries.