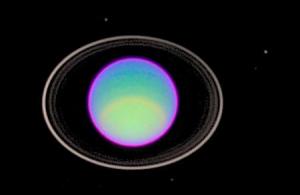 Hubble Space Telescope captured this false-color image of Uranus and its rings in 1998. The rings actually are much fainter than depicted here, so they weren't discovered until the 1980s. Most of the rings are made of small pebbles, although a few are made of tiny grains of dust. [NASA/JPL/STScI]

The rings around the planet Uranus are young. And like most youngsters, they’re pretty active.

Uranus is the third-largest planet in the solar system, and the seventh planet from the Sun. This evening, it appears close to the upper right of the Moon. Through binoculars, it looks like a small star with a hint of blue green.

The planet’s rings are so faint that they were discovered only about four decades ago. Most of them are made of small pebbles, although a few are made of dust. The rings probably are less than 600 million years old — about one-seventh the age of Uranus itself.

The brightest and densest ring is the Epsilon ring. Its orbit is a little off-center, so the width of the ring varies. The section that’s closest to Uranus is only about 20 miles wide. But as the particles in the ring move away from the planet, the ring spreads out to about 60 miles wide. It’s held in check by the gravity of two small moons — one on the inside edge of the ring, and the other on the outside.

The Delta ring looks wavy. That may indicate that it, too, is held in check by a tiny moon. The moon may create the waves as it moves past the ring particles.

Two outer rings were discovered in the early 2000s. One of them is fairly blue, suggesting it’s made mainly of ice. The ice particles may be chipped off the surface of a nearby moon when it’s hit by other space rocks — adding fresh ice to one of Uranus’s dynamic rings.