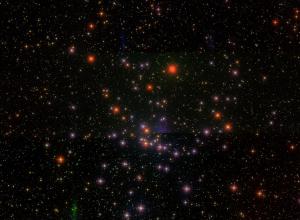 This family of stars, Messier 48, is falling apart. It consists of hundreds of stars of various masses, sizes, and colors. As the cluster orbits the center of the Milky Way Galaxy, however, its stars are stripped away by the gravity of the galaxy's stars and gas clouds. The cluster is about 2,400 light-years from Earth, and appears near the bright star Procyon. [Sloan Digital Sky Survey]

Most stars are members of giant families — hundreds or even thousands of stars that are born together. They form star clusters that can span hundreds of light-years. Because of that great size, though, the families are hard to keep together. The siblings all tend to head off on their own.

That appears to be happening with a star cluster that’s in good view on March nights. Messier 48 is halfway up the sky in the south-southeast as night falls. It’s well below the bright star Procyon. Under dark skies, it’s visible to the unaided eye as a small, hazy patch of light. And in any case, it’s an easy target for binoculars.

Recent studies have placed M48 at a distance of about 2400 light-years. It contains hundreds of stars. And it’s roughly 450 million years old, which is quite young.

The cluster is about 125 light-years across. At that size, the stars are well spread out. So as the cluster moves through space, the gravity of the rest of the galaxy tries to pull it apart. And it appears to be doing so. Astronomers have identified three “clumps” of stars within the cluster. Two of them are close together, and are still moving at about the same speed and in the same direction. The third is away from the other two, and is moving in a different direction.

Most clusters dissolve within about a billion years. So M48 may be well along in that process — a big stellar family whose brothers and sisters are heading off on their own.