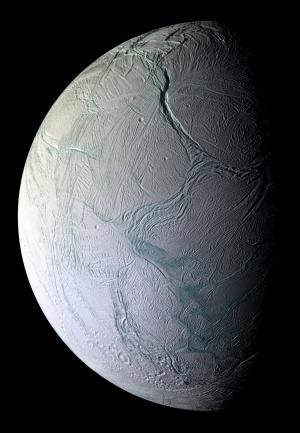 This color-enhanced image shows Enceladus, one of the moons of Saturn. It is one of the most reflective bodies in the solar system, with an almost pure white surface. Geysers of water and ice erupt from cracks near the moon's south pole (at top in this image from the Cassini spacecraft). The water comes from a global ocean beneath the moon's icy crust. The ocean may be warmed by mineral-rich thermal vents on the bottom, providing all the key ingredients for life: water, energy, and the right chemistry. [NASA/JPL]

One of the best places in the solar system to look for life is a small moon of Saturn. It appears to have everything you’d need to brew up life: water, energy, and the right kind of chemistry.

Enceladus is only about 300 miles in diameter — the distance from Chicago to Cleveland. It’s coated with almost pure white ice, making it one of the most reflective objects in the solar system.

An ocean of liquid water lies below that icy crust. It could be miles deep and cover the entire moon.

Water from the ocean shoots out through cracks in the crust near the south pole. The Cassini spacecraft flew through this plume. It found that the water contained particles that form where rock and hot water interact. And the particles contained high levels of organic compounds — the chemical building blocks of life.

That suggests that hot water packed with minerals shoots into the ocean from cracks or vents on the ocean floor. The environment around the vents could be a lot like that around vents in Earth’s oceans. The Earthly vents are surrounded by microbes, which get their energy from the chemicals in the water.

We don’t know if anything lives in the ocean of Enceladus. But the odds of life appear to be better there than just about anywhere else in the solar system.

Saturn is close to our own Moon at dawn tomorrow. It looks like a star to the left of the Moon. Jupiter and Mercury stand to the lower left. More about that tomorrow.