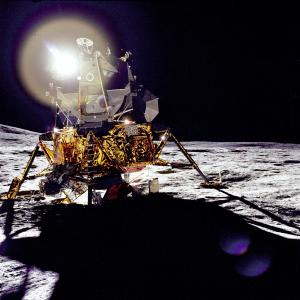 Sunlight creates a dramatic reflection off Antares, the Apollo 14 lunar module, which touched down on the Moon 50 years ago. Astronauts Alan Shepard, the first American in space, and Edgar Mitchell conducted two moonwalks and gathered almost 100 pounds of rocks and dirt. They also deployed a set of instruments that continued to operate for several years, including one, a laser reflector, that scientists still use today. [NASA]

The Moon has a bright companion at dawn tomorrow — Antares, the brightest star of Scorpius, which is close to the lower right of the Moon.

Fifty years ago today, another Antares got even closer to the Moon — the lunar module for Apollo 14. It landed in a region known as Fra Mauro. It was the intended landing site for Apollo 13, which had to abort.

Landing Antares wasn’t easy, either. A bad switch was trying to tell its computer to abort. And its radar didn’t work until the last minute. Yet Alan Shepard and Ed Mitchell made a pinpoint landing.

MITCHELL: 20 feet. 10. Three feet per second. Contact, Al! SHEPARD: Stop. Pro, auto, auto. MITCHELL: We’re on the surface. MISSION CONTROL: Roger, Antares. MITCHELL: That was a beautiful one. SHEPARD: Okay, we’re slightly off. We landed on a slope, but other than that we’re in great shape, right on the landing site.

During two moonwalks, though, they gathered almost a hundred pounds of rocks and dirt. And the astronauts set up instruments that worked for years — the legacy of Antares.