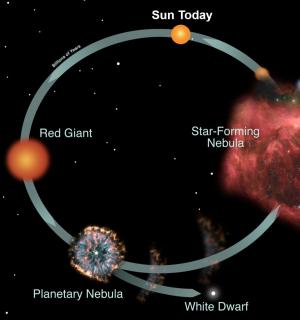 This diagram shows the 10-billion-year life cycle of the Sun. The Sun was born about 4.6 billion years ago from the collapse of a large cloud of interstellar gas and dust. Today, it is steadily "fusing" hydrogen in its core to make helium. When that process is completed, more than five billion years from now, the Sun will puff up to many times its current size, forming a red giant. About a billion years later, it will shed its outer layers, forming a colorful but short-lived bubble known as a planetary nebula. As the nebula fades, all that will remain will be the Sun's hot but dead core, a white dwarf. [NASA/Night Sky Network]

The Sun will stay bright and strong for a long time — but not forever. Billions of years from now, it will shed its outer layers. That will leave only its dead core — a cosmic ember known as a white dwarf.

In the prime of life, the Sun shines by producing nuclear reactions in its core. Right now, it’s “fusing” atoms of hydrogen to make helium. When the hydrogen is gone, the core will get smaller and hotter, allowing it to fuse the helium to make oxygen and carbon.

But the Sun isn’t massive enough to fuse those elements to make heavier ones. Without the radiation produced by the nuclear reactions, the core will collapse — but only so far. The electrons in the core will smash together far more tightly than in ordinary matter. But they can be squeezed only so much. They generate a pressure that stops the collapse.

As the core collapses, the Sun will cast off its outer layers, leaving only the white dwarf. It’ll contain about 60 percent of the Sun’s original mass, but squeezed into a ball the size of Earth. By comparison, today’s Sun is more than a hundred times wider than Earth.

The white dwarf will be so dense that a chunk the size of a sugar cube would weigh tons. So its surface gravity will be a hundred thousand times greater than Earth’s gravity.

The white dwarf will be extremely hot. It’ll take hundreds of billions of years to cool off — turning the white dwarf into a black dwarf.