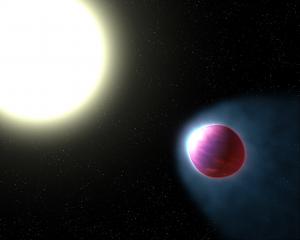 WASP-121b, a planet about 850 light-years from Earth, is being slowly eroded by radiation and winds from its host star. The planet and star are so close together that the planet's atmosphere is heated to 4,500 degrees Fahrenheit, while the star's gravity pulls the planet into a football shape. Astronomers have measured the composition of the planet's atmosphere and found some rare-earth elements, including vanadium. The system is in Puppis, which is low in the south on early January evenings. [NASA]

Like many rare-earth elements, vanadium could see a surge in demand in the coming years. It’s used in a type of battery at some wind- and solar-power stations. Such batteries aren’t all that common today. But they could become more common in the future.

Vanadium is the 20th-most-common element in Earth’s crust — found in minerals and in deposits of oil and gas. And astronomers have found another source — in a super-hot planet about 850 light-years away.

Metals have been seen in the atmospheres of several exoplanets. Such worlds are giants. And they’re so close to their parent stars that they’re extremely hot.

Astronomers measure what’s in the atmosphere by watching as a planet passes in front of the star. Starlight filters through the atmosphere, which adds the “fingerprint” of its own chemical elements. For WASP-121b, the list includes iron, nickel, magnesium — and vanadium.

The planet is just a couple of million miles from its star, so its atmosphere is heated to more than 4500 degrees. And the star acts as a blowtorch, blasting away some of the atmosphere — creating a fountain of hot metal.

WASP-121b and its star, WASP-121, are in the constellation Puppis, which is quite low in the south this evening. About 10 p.m., the system stands directly below Sirius, the brightest star in the night sky. But WASP-121 is so faint that you need a telescope to see it.