Two “number threes” are swinging past each other in the evening sky. One of them is Mars, which looks like a bright orange star high in the south at nightfall. And the other is Uranus. It’s just a few degrees from Mars, but you need binoculars to pick it out.

The planets of the solar system are split into two groups of four — one group close to the Sun, the other farther out.

Mars and Uranus are so different because they formed in different regions. Mars was born close to the Sun, where conditions were hotter. Radiation and winds from the young Sun cleared out most of the lighter elements, leaving only heavier ones. So Mars and the other inner planets are made of rock and metal.

Uranus formed far from the Sun, where it was much colder. The Sun couldn’t clear away the lighter elements in that region, so many of them glommed on to the newly forming planets — helping them grow to giant proportions.

Tonight, look for Uranus to the left of Mars by a bit more than the width of your finger held at arm’s length. Mars will move closer to Uranus over the next few days, and pass over the top of it a week from tonight. 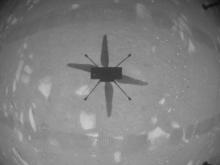