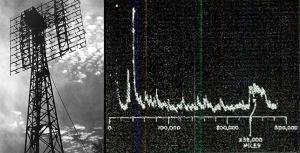 The U.S. Army bounced radar signals off the Moon on January 10, 1946. The experiment, Project Diana, was designed to test radar's ability to track missiles fired from the Soviet Union toward the United States. The tests, which used surplus equipment from World War II, also established a new field of science; today, astronomers use radar to study the planets and moons of the solar system. This image shows the antenna used to transmit and receive the radio beam, which was in New Jersey, and an oscilloscope display that depicts the transmitted radar signal (the peak at left) and the return signal from the Moon (smaller peak at right). [Wikipedia]

When World War II ended, the U.S. Army was concerned that future enemies might lob high-altitude missiles our way. So it wanted to know if radar could track them. But there weren’t any such missiles at the time, so there was nothing to practice on. So the leader of a Signal Corps team came up with another target: the Moon. His team bounced its first signals off the Moon 75 years ago today.

Project Diana was named for a Moon goddess. It was led by John DeWitt Junior. At age 16, he’d set up the first radio station in Nashville. Before the war, he built a radio telescope. He even tried to detect radio signals reflected from the Moon.

For Project Diana, his team used war-surplus radar equipment, which sent out pulses of radio waves. The receiver couldn’t move much, so the team could look only around moonrise or moonset.

The challenge was to see if the radar beam could pass through a layer of the atmosphere that reflects radio waves. After several days of trying, the team saw and heard the “echo” from the Moon on January 10th, 1946.

Other successful runs followed. The tests revealed that it was possible to “see” missiles with radar. And it established a new field of science. Today, astronomers use the technique to study the planets and moons of the solar system.

One of those targets is Venus, the “morning star,” which is near the Moon in tomorrow’s dawn twilight — two worlds “seen” by the light of radar.