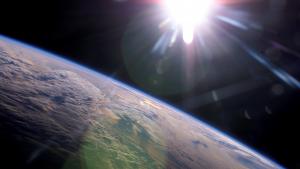 The Sun glistens above Earth's limb in this image from the International Space Station. Earth is closest to the Sun for all of 2021 on January 2, about 1.5 million miles (2.4 million km) closer than the average distance. The close range has little effect on Earth's climate. [NASA]

Earth begins the new year by snuggling close to the Sun. Early tomorrow, the Sun will be closest for the whole year — just 91 million miles away. That’s less than two percent closer than the average distance, though, so we really won’t notice the difference.

We do receive a little more sunlight, but Earth’s oceans and atmosphere do a good job of keeping the temperatures evened out.

The lopsidedness in a planet’s orbit is known as eccentricity. Earth’s orbit is pretty close to circular, so right now the eccentricity is low. But that’s not always the case.

The other planets of the solar system constantly tug at Earth — especially Jupiter and Saturn, the biggest and heaviest planets. Over a period of a hundred thousand years, they cause a sizeable change in the shape of Earth’s orbit.

At its maximum, the orbit is about four times more eccentric than it is today. During those times, the distance to the Sun varies by more than 12 million miles, so the orbit looks more stretched out. But at its minimum, the eccentricity is less than a third of what it is today. At those times, the distance to the Sun changes by just one million miles.

Today, the orbit is getting less eccentric. So there will be less change in our planet’s distance from the Sun in the coming centuries.

For this year, we’ll start moving away from the Sun by tomorrow afternoon. We’ll be farthest from it the day after another holiday: the Fourth of July.