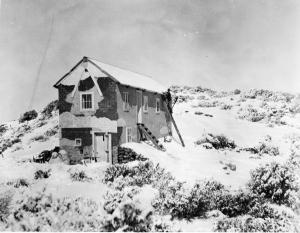 Snow blankets the ground around Harqua Hala Observatory, a Sun-watching station in Arizona, in the 1920s. The station was established by the Smithsonian Observatory to measure minute changes in the Sun's energy output as a tool for improving weather forecasts. It was atop a mountain that was miles from the nearest road, so everything had to be carried to the summit by hand or on mules. The site was bedeviled by strong winds, hazy skies, dangerous storms, venomous snakes, and other hazards; its director, returning after a trip to Washington, complained, "Devil appears to have claimed everything." [Smithsonian Institution]

A hundred years ago this month, Charles Abbot returned to the Smithsonian Observatory’s field station in the mountains west of Phoenix. Harqua Hala had been finished just months earlier. Yet as Abbot, the observatory’s director, climbed a five-mile trail to reach it, he saw that the station was a shamble. Some of the instruments had been destroyed. The water tank leaked. And one of the walls had buckled so severely that birds could fly through the cracks. “Devil appears to have claimed everything,” Abbot wrote.

During Harqua Hala’s five years of operations, the devils never went away. Weather, isolation, and the complexity of the work made life next to impossible.

Isolation was one of the site’s original selling points. The Smithsonian had operated a Sun-watching station near Los Angeles, but development spoiled the view. Abbot searched across the southwest for a better site, and picked Harqua Hala.

Observers there measured the Sun’s energy output, which Abbot hoped would lead to better weather forecasts. The work required exact timing and precise teamwork, plus long hours of calculations.

The weather added to their woes. Winds could reach gale force, and the summer monsoon brought heavy rains and vicious lightning. And high clouds and dust sometimes blocked the Sun, ruining a day’s work.

In 1925, Abbot decided the hazy skies were too much. So Harqua Hala was abandoned — left to the many “devils” of the Arizona desert.