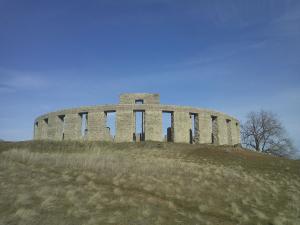 This replica of Stonehenge, the famous English archaeological site, sits above the Columbia River in Washington. It depicts what Stonehenge probably looked like when it was completed thousands of years ago. The structure was built as a memorial to the men who died fighting in World War I, and was dedicated shortly after the war's end. There are other Stonehenge replicas scattered throughout the United States--some serious, others more whimsical, such as Carhenge, in Nebraska. [MagicalT/Wikipedia]

Perhaps the most famous spot on Earth for watching the Sun is Stonehenge, in southern England. A circle of stones erected about 4500 years ago lines up with the sunset on the winter solstice, and sunrise on the summer solstice.

Not many people get to visit Stonehenge. But Americans don’t need to go all the way to England to get a look at it. There are several replicas of the site right here at home.

The first was built on a hill overlooking the Columbia River in Washington state. It depicts what Stonehenge probably looked like when it was completed. Construction on the site began in 1918. The concrete structure was built as a memorial to the men who died in World War I. The site’s benefactor chose Stonehenge as a motif because the view at the time said the original site was used for human sacrifice. He saw the new Stonehenge as a reminder that people were still being sacrificed to the war gods.

Other Stonehenges — some serious, others not — are found around the country. There’s “Bamahenge” in Alabama, and “Carhenge” in Nebraska, for example.

And there are two Stonehenges here in Texas. One is in the Hill Country. It’s about 90 percent the diameter of the original.

The other is in Odessa, at the University of Texas-Permian Basin. It was designed and built by art students and faculty. Its blocks weigh 20 tons or more. And the site is aligned to the sunrises and sunsets on the solstices — just like its famous inspiration.