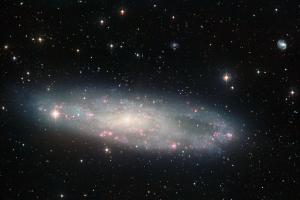 NGC 247 is a spiral galaxy in the Sculptor Group, one of the closest galaxy clusters to our own. It's a little smaller than our home galaxy, the Milky Way, but it is giving birth to more stars than the Milky Way. One of the galaxy's most prominent features is a dark zone on the right side of this image. The void contains a few old, faint stars but almost no young, bright ones. A recent study says the void could have formed when a blob of dark matter plunged through the galaxy's disk, scattering its stars. [European Southern Observatory]

Most galaxies are members of clusters. They’re bound together by gravity, so they move through the universe as a group. The Milky Way, for example, is one of the two main members of a cluster called the Local Group.

The nearest neighbor cluster is the Sculptor Group. It consists of a dozen or more galaxies. The center of the group is about 12 million light-years away.

The cluster’s dominant member is the Sculptor Galaxy. It’s a lot like the Milky Way, although it’s giving birth to many more stars; more about that tomorrow.

Most of the group’s other galaxies are fairly small and faint. One exception is NGC 247. It’s a beautiful spiral that we see almost edge-on. It’s smaller than the Milky Way, but it contains some bright nurseries — the birthplaces of new stars.

Its most unusual feature is a dark “void” on one side of the galaxy’s core. It looks like a hole has been punched right through the galaxy’s disk. The region contains a few old, faint stars, but almost no young bright ones.

The void could have formed when a blob of dark matter plunged through the disk like a rock through tissue paper. That would’ve scattered stars in the region and blown away the gas and dust for making more — leaving the galaxy with a big hole.

The Sculptor Group is spread across the constellation Sculptor, and the adjoining constellation Cetus. NGC 247 is too faint to see with the eye alone, but it’s an easy target for small telescopes.