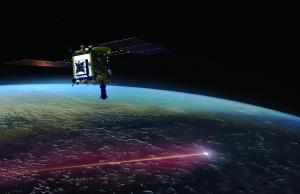 A small capsule streaks into Earth's atmosphere in this artist's concept, bringing rocks and dirt from the surface of the asteroid Ryugu. Part of the Hayabusa 2 mission, the capsule is scheduled to parachute to a landing in Australia on December 5. In addition to gathering samples, Hayabusa 2 compiled a thorough photographic atlas of the asteroid and deployed several small rovers, which hopped across the surface. The bulk of the spacecraft (top left) will fly past Earth and take aim at another asteroid. [JAXA]

Six years and three days after it left Earth, part of a Japanese spacecraft is headed home. The small capsule holds a few ounces of rock and dirt from an asteroid.

Hayabusa 2 will streak past Earth tomorrow. It’ll release the sample capsule, which will plunge into the atmosphere and parachute to a soft landing in South Australia.

The craft began flying along with the asteroid Ryugu in June of 2018. The asteroid is more than a half mile in diameter, and its orbit occasionally brings it quite close to Earth.

Hayabusa compiled maps of the asteroid, and dropped several small rovers and cameras on its surface. Those observations revealed that the asteroid is quite dark — suggesting it contains a lot of carbon. And they showed that the surface is covered by big rocks and even boulders.

Hayabusa 2 briefly touched the surface and scooped up some samples. Months later, it fired a bullet at the asteroid, then swooped in to grab some of the debris that was blasted into space. Images showed that much of the surface material was quite red. That suggests that Ryugu was once much closer to the Sun than it is now, so it was bombarded by more radiation.

Hayabusa 2 left the asteroid last November. After it releases the 35-pound sample capsule for its return to Earth, the rest of the spacecraft will keep on going. It’ll be targeted to arrive at another asteroid in a decade or so — long after the completion of its original mission.