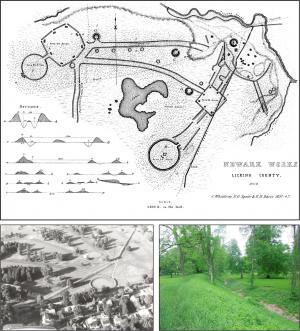 Newark (Ohio) Earthworks was built by the Hopewell people roughly 2,000 years ago. The complex consists of several giant geometric figures (shown in a map drawn in the 1800s, top, and seen in an aerial photograph from the 1980s, lower left). The figures were built to a high level of precision. Scientists have found alignments to key moonrise and moonset points. The odds of such alignments being random are roughly one in a million. That suggests the earthworks served as a giant lunar calendar, and served an important role in the ritual and ceremonial life of the surrounding villages. The image at lower right shows a recent view of one of the main walls, which was fronted by a moat. [Clockwise from top: Ephraim George Squier/Edwin Hamilton Davis (1848); Ericplaysbass; Einar E. Kvaran]

Many cultures have paid attention to that cycle. They’ve even built structures to mark it.

One example is the Newark Earthworks in central Ohio. It consists of several giant geometric figures — an octagon, a circle, an ellipse, and a square. They were built a couple of thousand years ago by the Hopewell culture.

The Hopewell lived in small villages. But they built large earthworks for ceremonial events across the region.

The Newark site covered four and a half square miles. Its figures were built to a high level of precision. And the circle and octagon were linked. Scientists studied those figures. And they found many alignments to key moonrise and moonset points. The odds of such alignments being random were one in a million.

The scientists also found alignments between the two figures and nearby hilltops, and between other figures on the site. Together, they suggest that the site was a giant observatory for watching the Moon — 2,000 years ago.