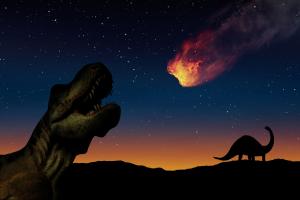 This artist's concept shows an asteroid plunging through Earth's atmosphere, headed toward an impact near the coast of the Yucatan peninsula. Research indicates that the impact caused a mass-extinction event that killed most of the dinosaurs and much of the other life on Earth, although some scientists suggest the cause was a series of massive volcanic eruptions. [Gerd Altmann/Pixabay]

For decades, the leading idea has said that the dinosaurs were killed off when a giant asteroid slammed into Earth. But some scientists disagree with that idea. They blame the demise on massive volcanic eruptions. A recent study, though, not only reaffirms the asteroid scenario, but says the volcanoes might have prevented even more extinctions.

Most of the dinosaurs died off about 66 million years ago. And they vanished quickly, indicating that something big happened to our planet then. And it did. An asteroid several miles wide slammed into the Gulf of Mexico, off the coast of Yucatan.

The impact blasted cubic miles of material into the atmosphere. The debris blotted out the Sun, making the entire planet much colder. The impact also created acid rain and had many other nasty effects. The combination could have changed the climate enough to destroy most of the dinosaurs.

On the other hand, massive eruptions were taking place at the same time at the Deccan Traps — massive volcanoes in India. The eruptions lasted for hundreds of thousands of years. They belched huge amounts of carbon dioxide and other gases into the air.