NASA has sent some odd missions into space. Few sound stranger, though, than a craft that was launched 50 years ago today: OFO — Orbiting Frog Otolith. It carried a pair of male bullfrogs to study how their balance system adapted to life without gravity.

Over the decades, a whole menagerie of living organisms has been sent into space: dogs and cats, spiders and spider monkeys, hissing cockroaches, and many more. The list includes several species of frog.

But OFO was the first to carry bullfrogs. They were selected because their balance mechanism — built around a small rocky structure called an otolith — functioned in a similar way to the human system.

Scientists were interested because several Apollo astronauts had experienced space sickness. This nasty illness was caused by problems with the inner ear’s adaptation to microgravity. So learning more about it might help minimize the problem for future astronauts.

The frogs were inside a centrifuge that periodically spun up to create roughly half the pull of normal gravity.

Electrodes were inserted near the frog’s otoliths to record electrical impulses from the balance system. They found that the frogs had a tough time for the first few days in orbit. But their systems settled back to normal during the final day of the experiment.

Unfortunately, this was a one-way mission. The frogs perished when their capsule’s battery died — ending the first mission of bullfrogs in space. 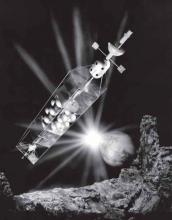