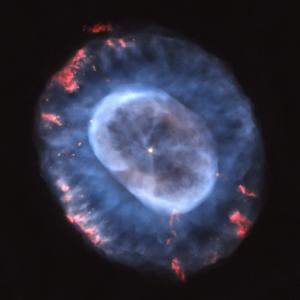 The Blue Snowball Nebula is the last gasp of a dying star. The star has expelled its outer layers of gas into space, leaving behind only its hot core, which is becoming a white dwarf. Ultraviolet energy from the core makes the expelled gases glow. The blue color comes from oxygen in the nebula. The nebula is about 6,000 light-years away, in Andromeda. [NASA/ESA/A. Hajian (University of Waterloo)]

Few objects in the universe are more beautiful than the final breath of a Sun-like star. The star expels its outer layers, forming a colorful cloud that’s lit up by the star’s hot core. The cloud can be sculpted into amazing shapes — from a butterfly to the heart of an atom.

One of those dying stars is the Blue Snowball Nebula. It’s high in the sky at nightfall, in Andromeda. Through a small telescope, it does look blue, and it has the slightly fuzzy outline of a snowball.

The system’s details are uncertain. That’s mainly because astronomers have had a hard time figuring out its distance. Measuring the distances to such nebulae is hard because most of them are far away, and they’re spread out — they’re not sharp points like stars are.

In recent years, though, astronomers have used several techniques to zero in on the distance. They suggest that the Blue Snowball is about 6,000 light-years away. If so, then the nebula spans the better part of a light-year.

The star began casting off its outer layers a few thousand years ago as seen from Earth. The nebula consists of two concentric shells of gas. The outer one is expanding faster than the inner one — more than a hundred thousand miles per hour.

The star is in the final stages of life. It’s about 60 percent the mass of the Sun, but about 200,000 degrees hotter. Its ultraviolet energy causes the nebula to glow like a neon bulb — revealing the last breath of a dying star.