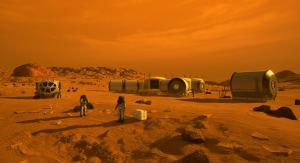 Astronauts work around a Mars habitat and rover (left) in this artist's concept. Mars explorers will face hazards both on Mars and during the long round-trip journey, including solar flares, cosmic rays, Martian dust, and many others. [NASA]

The trip to Mars won’t be easy. Astronauts might experience months of low gravity and exposure to cosmic rays. Big storms on the Sun could zap them with radiation. And that’s not including the dangers of actually landing on Mars.

It takes about six to 10 months to travel from Earth to Mars. A crew might spend most of that time with almost no gravitational pull. That could cause fluids to pool in their heads, creating vision changes and other problems.

One way to overcome those problems is to spin part of the spacecraft, creating artificial gravity. But that adds weight and complexity. As Plan B, Mars travelers might wear a device that pulls some of the fluids into their lower bodies.

Mars-bound astronauts would be zapped by cosmic rays — particles accelerated to almost the speed of light by exploding stars and other powerful objects. Earth’s magnetic field and atmosphere prevent them from reaching the surface. On the way to Mars, though, there’d be no such protection. The particles could cause cancer, heart disease, or other health problems.

And the Sun sometimes produces blasts of particles and radiation. A craft would need heavy shielding to protect its occupants from danger — adding even more weight and expense for a trip to Mars.

For now, look for Mars in the southeast in early evening, shining like a bright orange star. Tonight, it’s to the upper right of the Moon as they climb into view, and below the Moon at dawn tomorrow.