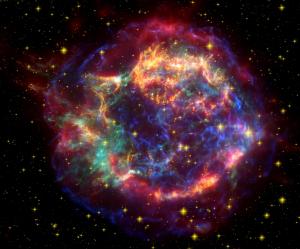 This composite image shows Cassiopeia A, the shattered remains of a star that exploded as a supernova around the year 1680 (as seen from Earth). The false-color image combines visible light from Hubble Space Telescope (gold), infrared from Spitzer Space Telescope (red), and Chandra X-Ray Observatory (blue and green). The different filaments and structures are debris from the explosion, which is expanding into space at millions of miles per hour. The cloud contains a variety of chemical elements forged in the star's core or in its violent explosion. Some of that material could someday be incorporated into new stars or planets. [NASA/JPL/Caltech]

The brightest stars of Cassiopeia form one of the most prominent patterns in the night sky — a big letter M or W. It’s in good view in the northeast this evening, and wheels high across the north during the night.

You might think that if another bright star suddenly appeared near this pattern, someone would take notice. But a stellar explosion in that region more than three centuries ago apparently escaped attention — a fact that may reveal a lot about the blast itself.

The exploding star is known as Cassiopeia A. Today, it’s a big bubble of hot gas that’s expanding at millions of miles per hour. From the speed of that expansion, astronomers calculate that the star exploded around the year 1680 as seen from Earth.

One astronomer did record a new star in Cassiopeia that year. But no one else saw it, and it’s not quite in the same position as Cas A, so it’s possible that the sighting was just a mistake.

It’s surprising that no one saw it because the explosion was a supernova — the star blasted itself to bits. Supernovae normally shine as brilliantly as billions of “normal” stars. And this one was only about 11,000 light-years away, so it should have put on a good show.

The fact that it didn’t suggests that the star had expelled much of its gas into space before the explosion. That created a cocoon that absorbed much of the explosion’s light.

The blast expelled an amazing array of elements into space. More about that tomorrow.