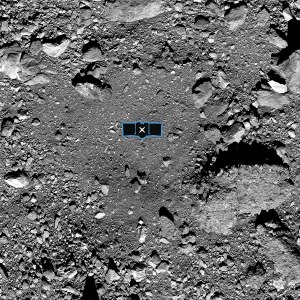 This image shows the target touchdown spot for OSIRIS-Rex, a spacecraft that has been flying along with the asteroid Bennu for almost two years. The craft (shown to scale) will descend toward the asteroid on October 20, then fire a burst of gas to stir up dust and pebbles. It will collect a few ounces of the material, then back away. It will leave the asteroid early year and return the samples to Earth in 2023 for analysis. [NASA/GSFC/Univ. Arizona]

Osiris-Rex is ready to kick up some dust. It’s been flying along with an asteroid for almost two years. And next week, if all goes according to plan, it’ll execute a quick touch-and-go. It should snag at least two ounces of pebbles and dust grains, then stow them for return to Earth.

Bennu is classified as a “primitive” asteroid. That means it hasn’t changed much since it formed about four-and-a-half billion years ago. So samples of the asteroid should reveal details about conditions in the early solar system, when Earth and the other planets were born. And they may contain organic molecules like those that led to the creation of life on Earth.

Osiris-Rex will touch down inside a crater near Bennu’s north pole. Its target landing site, called Nightingale, is only a few dozen feet wide. The site appears to offer a good supply of small particles for capture. The particles look like they’ve been excavated from below the surface by a recent collision with another space rock. That would provide samples untouched by cosmic rays or the solar wind, which can alter their chemistry.

Osiris-Rex arrived at Bennu — named for an Egyptian god of rebirth — in December of 2018. It’s compiled maps of surface features, the asteroid’s composition, and more. It’s scheduled to remain close to Bennu until spring, then head for home. The samples will parachute to Earth in September of 2023.

We’ll have more about Osiris-Rex tomorrow.