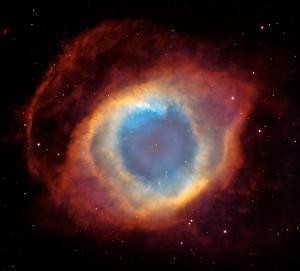 A combined image from Hubble Space Telescope and a ground-based telescope in Chile shows details in the Helix Nebula, the last gasp of a dying star. The nebula is shaped a bit like a barrel, and we're looking down through the barrel. The star's hot core, which is becoming a white dwarf, is at the center of the nebula. The nebula consists of the gas that made up the outer layers of the star, which are expanding into space. The debris is sometimes clumpy, forming finger-like structures. The Helix is about 700 light-years from Earth, and spans about three light-years. [C.R. O'Dell (Vanderbilt) et al./ESA/NOAO/NASA]

Aquarius drifts across the southern sky on autumn nights. Tonight, it’s in the southeast as the sky gets good and dark, and due south a couple of hours later.

The constellation is known as the water-bearer. It represents a man or boy pouring water from a vase or cup.

Aquarius is one of several constellations in that region of the sky associated with water. Long ago, those constellations made key appearances during the rainy season in the Mediterranean, where the constellations were first drawn. In Egypt, for example, Aquarius heralded the annual flooding of the Nile River — an event that assured a good harvest.

One of its treasures is visible through good binoculars or a telescope: the Helix Nebula. It’s the final gasp of a dying star. As the star used up the nuclear fuel in its core, it blew its outer layers into space. Today, those layers span about six light-years. They’re zapped by intense radiation from the dying core, causing the nebula to glow.

The Helix is actually shaped like a barrel, and we’re looking down the center. The barrel is tilted a bit, so we see its top as one ring, and its bottom as another, shifted slightly to the side. Bright colors and intricate detail show up in images of the nebula — one of the highlights of the water-bearer.