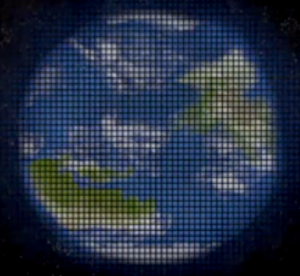 This artist's concept depicts a possible view of a planet in another star system as seen by a spacecraft using the Sun as a gravitational lens. The craft would travel to a minimum of 550 times the distance from Earth to the Sun -- more than three times farther than any working spacecraft. It then would use the Sun's gravity as a lens to magnify, enlarge, and focus the view of planets in a star system that aligned directly behind the Sun. Scientists and engineers are developing concepts for such a mission for possible launch in the 2030s. [Slava Turyshev/NASA/JPL]

One of astronomy’s key goals is to take sharp pictures of planets in other star systems. That’s impossible to do with current technology because the planets are tiny, and they’re embedded in the glare of their parent stars. So astronomers are working on new technologies.

One possibility is using the gravity of the Sun as a lens to bring planets into focus.

The concept is known as the solar gravitational lens. The gravity of the Sun “warps” the space around it. If you put a telescope at the right point in space, then any planets that align directly behind the Sun would form a ring of light around it. Observations over many days or weeks would allow scientists to create an image of the planet.

Such a task won’t be easy, though. For one thing, a telescope would have to be at least 550 times farther from the Sun than Earth is — about four times farther than any spacecraft has gone before.

A team led by the Jet Propulsion Laboratory is working on the concept, though. Large, thin “sails” would use the pressure of sunlight to propel the craft. That would allow it to reach its target distance in just a couple of decades.

The probe would look at a single star system, so scientists would pick a system with several planets. Then, as it sailed away from the Sun, the craft would examine each planet in the system — compiling an album of pictures of distant worlds.