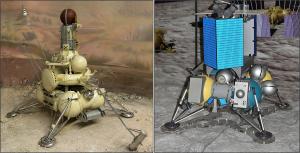 Mockups of two generations of Soviet/Russian lunar landers are shown side by side. At left is Luna 16, which returned a few ounces of lunar soil to Earth on September 24, 1970. It was the first robotic sample return from any other astronomical body. At right is a 2015 concept for Luna 25, which will continue the Luna program that was abandoned in 1976. Plans call for launch late next year, with the craft to land in a crater near the Moon's south pole. [bembmv/Pline; Wikipedia]

A half-century ago today, a Soviet spacecraft parachuted to Earth with a precious cargo: a few ounces of lunar dirt. It was the first time that samples had been brought to Earth by a robotic probe.

Luna 16 had arrived at the Moon just a few days earlier, on a volcanic plain known as the Sea of Fertility. It landed during the lunar night — another first for any mission. It drilled into the powdery surface and pulled out a sample for return to Earth.

Several more Luna probes followed. The last was another sample-return mission, Luna 24, in 1976. Since then, neither the Soviet Union nor Russia has attempted a single trip to the Moon. But Russia may get back in the game over the next few years.

The Russian space agency has announced plans for a new mission — Luna 25. Plans call for it to land in a crater near the south pole. The crater floor should be in perpetual darkness, so it could contain deposits of frozen water. The lander will drill into the surface to see if it can find any of that ice.

Current plans call for a launch late next year, although the launch has been delayed several times. Luna 26 — an orbiter — would follow a year or so later. And another lander, Luna 27, would come after that — renewing a program of lunar exploration.

Look for the Moon and some bright companions this evening. The brilliant planet Jupiter is close to the upper left of the Moon, with the fainter planet Saturn farther from the Moon.