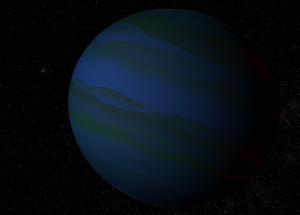 An artist's concept depicts TrES-2b, the darkest planet yet discovered. It reflects no more than one percent of the light from its parent star, TrES-2. The system is named for the project that discovered it, the Trans-Atlantic Exoplanet Survey. TrES-2b is a giant ball of gas, and it's locked so that the same hemisphere always faces its star. Powerful winds may carry some of the heat from the dayside around to the nightside. [John Van Vliet/Wikipedia]

The planet known as TrES-2b sounds like it should glow like wild. It’s only about three million miles from its parent star — much closer than Mercury is to the Sun. And its night side may sizzle at almost 3,000 degrees. Yet the planet appears to be the darkest yet seen — darker than charcoal.

TrES-2b is named for the project that discovered it — the Trans-Atlantic Exoplanet Survey. The planet orbits a star that’s a near twin to the Sun — it’s the same size, mass, and temperature. It’s about 750 light-years away.

TrES-2b is a giant ball of gas. It’s bigger and heavier than Jupiter, the giant of our own solar system. And it’s “locked” so that the same hemisphere of the planet always faces the star, just as the same side of the Moon always faces Earth. Powerful winds may carry some of the daytime heat to the nightside.

TrES-2b appears to reflect no more than one percent of the light from its star. By comparison, the Moon, which is quite dark, reflects about 10 percent of the sunlight that hits it.

The planet may be so dark because the heat prevents bright clouds from forming in its atmosphere. Or dark, heavy compounds in the atmosphere may absorb light — leaving TrES-2b in the dark.

The TrES-2 system is high overhead at nightfall, at the edge of Draco, the dragon. The star is too faint to see without a telescope. But it’s near one of the wingtips of Cygnus, the swan, which soars high across the sky in early evening.