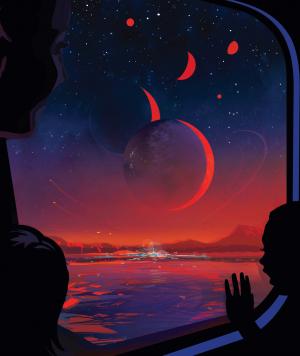 A NASA poster shows a fanciful future view of a spaceport on Trappist-1e, one of seven planets in the tightly packed system. Several of the planets may reside in the habitable zone, the distance from the star (known as Trappist-1) where temperatures are just right for liquid water to exist on the surface. And all of the planets are much closer to Trappist-1 than Mercury is to the Sun. [NASA]

Trappist-1 is about as puny as a star can get. It’s less than 10 percent as massive as the Sun, and less than one-tenth of one percent as bright. Yet astronomers spend a lot of time studying it because it’s home to one of the most interesting planetary systems yet found.

The system consists of seven known planets. All of them are closer in than Mercury, the solar system’s innermost planet, is to the Sun. And five of them are about the same size and mass as Earth. And several of the planets could reside in the star’s habitable zone. That’s the distance from the star where temperatures are just right for liquid water — a key ingredient for life.

That doesn’t mean that those planets are habitable. Depending on the composition of their atmospheres, some of them could be hotter than Venus — hot enough to melt lead. And the outer planet could be an iceball.

What’s more, although the star is feeble, it sometimes produces giant outbursts of energy and charged particles. They could strip away a planet’s atmosphere or change its chemistry. Either one could render the planet unable to support life. Even so, one of the system’s planets is considered a reasonable home for life, and we’ll talk about that tomorrow.

Trappist-1 is in Aquarius, which is in the southeast at nightfall. It’s near the border with Pisces. But even though the star is only 40 light-years away, it’s far too faint to see without a big telescope.