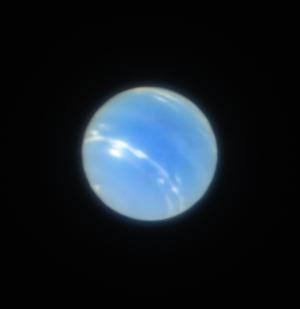 Bands of high-altitude clouds decorate this image of the planet Neptune, which is shining at its best and brightest in mid-September. Extreme conditions inside the planet may forge a "rain" of solid diamonds. [ESO/P. Weilbacher (AIP)]

The giant planet Neptune probably has layers of hot “ice” — both the literal kind and the figurative kind: diamonds. They’re thousands of miles below the planet’s cloud tops, forged under extreme conditions.

Neptune is the fourth-largest planet in the solar system — almost four times the diameter of Earth. But it doesn’t have a solid surface. Instead, its deep atmosphere gives way to layers that are liquid, then solid.

The layers in the middle probably contain a lot of water. The region just below the atmosphere is liquid. At the bottom of that layer, though, temperatures and pressures are so high that the water molecules may break apart. Their oxygen atoms would form a rigid formation — like the framework of a building. But the electrically charged hydrogen atoms would flow through the framework. That flow might account for all or part of Neptune’s odd magnetic field.

And below that layer, conditions are even more extreme. They could squeeze carbon molecules so tightly that they’re transformed into diamonds. The diamonds would plummet deeper into Neptune, generating heat as they fall — producing more “hot ice” in this giant planet.

And Neptune is putting on its best showing of the year. The planet is lining up opposite the Sun, so it rises around sunset and is in view all night. It’s brightest for the year, too. Even so, you need a small telescope to see it, near the border between Aquarius and Pisces.