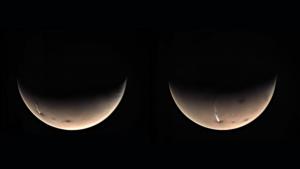 A long ribbon of clouds streams away from the summit of Arsia Mons, a volcano on Mars, in these images from Mars Express, snapped in July 2020. The cloud forms when winds flow over the top of the volcano, which is about 12 miles (20 km) tall. Water vapor in the winds freezes as it hits higher, cooler altitudes, forming the cloud, which can cover more than 1,100 miles (1,800 km). The cloud forms most frequently around the start of summer in Mars's northern hemisphere. The season arrives on September 4. [ESA/GCP/UPV/EHU Bilbao]

Summer arrived in the southern hemisphere of Mars a couple of days ago, on the summer solstice. And if a previous pattern holds, a long ribbon of clouds may be streaming away from a volcano just south of the equator.

Arsia Mons is the second-largest volcano on the Red Planet. It covers an area as big as Missouri, and it’s about 12 miles tall. But it hasn’t erupted in at least 10 million years.

Around the time of the southern summer solstice, a long cloud flows away from the summit. The cloud can extend for up to 1100 miles — roughly the distance from New York to Kansas City.

The Arsia Mons cloud has been observed several times over the years. Its most recent appearance was in 2018 — the last solstice. It appeared first thing in the morning, built across the landscape, then drifted away from the volcano and disappeared by early afternoon. It showed up in satellite images for about 90 days. Nothing else on Mars comes even close to the cloud’s length and persistence.

The cloud probably forms as warm, damp winds flow up and over the volcano. At altitudes of about 20 miles, the water vapor freezes, forming the cloud. As the planet warms in the afternoon, the ice vaporizes once again — and the cloud vanishes.

Mars trails the Moon across the sky tonight. They climb into good view by 10:30 or 11, with Mars to the lower left of the Moon. It looks like a bright orange star. 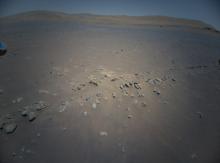