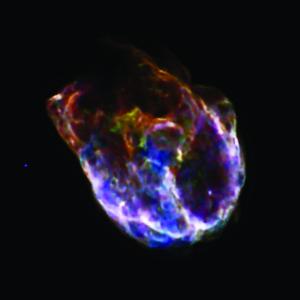 A cloud of debris from an exploded star contains large amounts of oxygen (shown in green). Most of the oxygen we breathe came from such debris, which was incorporated into the newly forming Sun and Earth. The heavy stars that explode as supernovae produce many chemical elements during their lives, then produce even heavier elements during the explosion. This supernova remnant, known as N132D, is about 160,000 light-years away in the Large Magellanic Cloud, a companion galaxy to the Milky Way. This X-ray image, snapped by Chandra X-Ray Observatory, shows the expanding clouds of debris as it appeared about 3,000 years after the star exploded. [NASA/CXC/NCSU/K.J.Borkowski et al.]

Oxygen is one of the most essential elements on Earth. It makes up about one-fifth of the mass of the atmosphere, nine-tenths of the mass of water, and two-thirds of the mass of the human body. It’s a by-product of plant life, and a necessity for animal life. And we use it for everything from medical treatments to rocket propellant.

All of the oxygen atoms on Earth — and throughout the universe, for that matter — were made by stars.

When a star is born, it’s made mainly of hydrogen, the simplest chemical element, which was forged in the Big Bang. For most of its life, the star fuses the hydrogen in its core to make helium. At the end of its life, a star as massive as the Sun or heavier fuses the helium to make heavier elements. A star like the Sun makes carbon and oxygen. Heavier stars make even more elements — all the way up to iron.

Over the 14-billion-year history of the universe, stars have made more oxygen than any other element. Today, it accounts for about one percent of all the atoms in the universe.

When a star dies, it expels much of its gas into space. Stars like the Sun do so in a fairly gentle process, creating beautiful clouds that eventually dissipate. More massive stars do it more explosively, blasting out debris at a few percent of the speed of light. This mixture of elements can then be incorporated into new stars and planets — and, at least in the case of our own Earth, into living organisms as well.