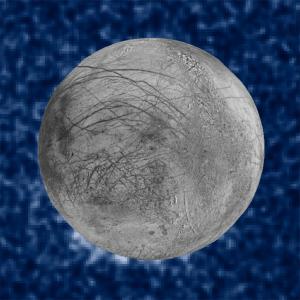 A combined image from two spacecraft shows possible plumes of ice or water erupting from Europa, one of the larger moons of Jupiter. The plumes, seen by Hubble Space Telescope, are the bright streaks near the bottom of the moon's disk, seen by Galileo, which orbited Jupiter for more than a decade. Europa is one of several worlds in the solar system with suspected ice volcanoes. A future mission, Europa Clipper, will look for additional evidence of them. [NASA/ESA/W. Sparks (STScI)/USGS Astrogeology Science Center]

Volcanoes don’t have to be hot. In fact, volcanoes on several worlds of the solar system may belch liquid water, forming mountains of ice.

These worlds have oceans of water trapped below their icy crusts. Some of the water may escape through cracks or thin spots in the crust. It spews out onto the surface, forming a mound of ice.

Europa Clipper, a mission scheduled for later this decade, will look for evidence of ice volcanoes. It’ll search for more plumes of water vapor around the big moon. And scientists will compare its pictures to those taken by earlier missions. That will show whether any ice mounds have appeared in recent decades — evidence of cold volcanoes on a cold moon.

Jupiter appears near our own Moon tonight. It looks like a brilliant star. Europa and three other moons are visible through binoculars, arrayed like tiny stars near the giant planet.

We’ll talk about the Moon and another giant planet tomorrow.