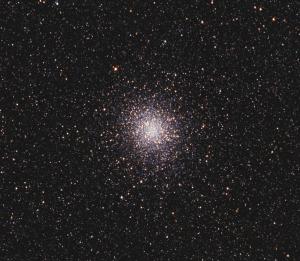 Thousands of stars sparkle in the globular cluster Messier 22 in this image from an amateur astronomer. The cluster contains hundreds of thousands of stars in all. Recent research has revealed that the cluster's core also contains at least two black holes, each of which is 10-20 times the mass of the Sun. Most clusters contain only one black hole, so the presence of two suggests that there could be even more. M22 is in Sagittarius, above the "lid" of the teapot outlined by some of the constellation's brightest stars. [hewholooks/wikimedia]

Sagittarius is packed with star clusters. That’s mainly because the center of the Milky Way Galaxy lies within its borders. So as we look in that direction, we’re looking into dense clouds of stars, plus the gas and dust for making more stars.

One of the most prominent clusters is Messier 22. It’s about 10,000 light-years away. But it contains hundreds of thousands of stars, so it’s an easy target for binoculars. It’s in the south at nightfall, above the “lid” of the teapot formed by some of the brightest stars of Sagittarius.

M22 is a globular cluster. All of its stars are packed into a sphere that’s about a hundred light-years across. And they’re among the oldest stars in the galaxy. So almost all of them are fairly small and faint.

The cluster was born with some stars that were big, bright, and heavy. But such stars expire quickly. Some of them explode, leaving behind a neutron star or a black hole. Others skip the explosion and collapse directly to form a heavier black hole.

And astronomers have found two black holes in M22’s core. Both of them are fairly heavy — between 10 and 20 times the mass of the Sun. And each of them is devouring a companion star.

Most models say a globular cluster should have just one black hole at its core. The rest should be kicked out by encounters with other black holes. Since astronomers have found two black holes in M22, though, even more could be awaiting discovery.