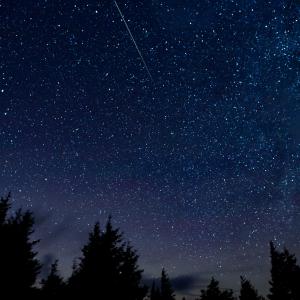 A Perseid meteor streaks through the dark night skies of West Virginia in this 2015 image. This year's shower will be at its best over the next few nights. [NASA/Bill Ingalls]

Swift-Tuttle is one of the biggest comets yet seen — about 15 miles across. It’s also one of the messiest. Every time it gets close to the Sun, it sheds countless grains of dust. Those grains spread out along the comet’s path. And every summer, Earth plows through the cloud. That creates the Perseid meteor shower, which will be at its best the next few nights.

Comets are balls of ice and rock left over from the birth of the solar system. When they get close to the Sun, they heat up. That vaporizes some of their ice, which in turn releases tiny bits of dust and rock.

The cloud of debris is thickest around the comet itself. So the Perseid meteors are at the their best when Swift-Tuttle is close to the Sun. Right now, though, it’s headed away from the Sun, and won’t return for more than a century.

Even so, the Perseids are still one of the best showers of the year. As Earth flies through the cloud of comet dust, the grains ram into the atmosphere at more than a hundred thousand miles per hour. They vaporize, forming the glowing streaks of light known as meteors or shooting stars. At the shower’s peak, which is expected in the wee hours of Wednesday morning, it might produce several dozen meteors per hour.

Unfortunately, the Moon will be in the sky then. Its light will overpower most of the meteors. Yet a few will shine through. The view is best under dark skies, away from city lights — beautiful fireworks from a messy comet.