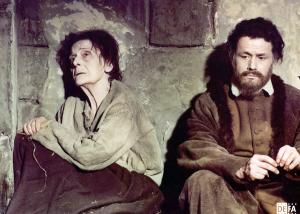 A scene from the 1974 German film "Johannes Kepler" depicts the great astronomer with his mother, Katharina, who was on trial for witchcraft. She was arrested on August 7, 1620. Kepler successfully defended her against the charges. [DEFA-Studio für Spielfilme]

Like everyone else, astronomers sometimes have to take some time off to care for family members. Few of them are having to defend against accusations of witchcraft, though.

But that’s what happened to Johannes Kepler. Four hundred years ago today, his mother was arrested — and charged with 49 counts of witchcraft. Kepler moved his family to her village in southern Germany, where he led her defense — and eventually won the case.

Kepler formulated the laws of planetary motion. They provided proof that Earth wasn’t the center of the solar system. Instead, they showed that Earth and the other planets orbited the Sun.

Kepler’s mother was first charged with witchcraft in 1615. She was 68 years old and a widow. And she brewed up herbal remedies that were sometimes accompanied by charms. That made her a good candidate for charges of black magic.

Witnesses said she’d caused them great pain, passed through closed doors, and even turned herself into a cat. She was one of 15 people indicted for witchcraft at the time — and eight of them were executed.

Kepler won her release, and she left town. But when she returned, in 1620, she was arrested again. She was chained to the floor of a cell and threatened with torture if she didn’t confess. She refused.

Kepler used science and common sense to refute the charges. After 14 months in prison, she was acquitted — thanks to the efforts of her son, one of history’s greatest astronomers.