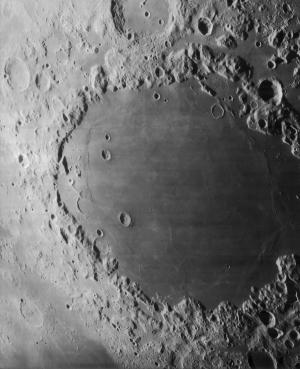 The Sea of Crises is one of the most noticeable features on the lunar surface. It's a small, dark circular patch near the Moon's eastern limb. This image, from Lunar Orbiter 4 in 1967, shows a wrinkled surface that formed as molten rock bubbled up from below the surface to fill a basin created when an asteroid slammed into the Moon billions of years ago. The feature, also known as Mare Crisium, is about 350 miles in diameter. A Soviet probe landed there in 1976 and brought back a few grams of the lunar dirt. [NASA]

A brilliant triangle slides across the south tonight: the Moon and the planets Jupiter and Saturn. Jupiter looks like a brilliant star above the Moon at nightfall. Fainter Saturn stands to the left of the Moon.

The Moon is almost full, so almost the entire hemisphere that faces our way is in sunlight. That reveals the pattern of light and dark that makes up the Moon’s features.

One easy-to-spot feature is at the top right edge of the lunar disk in early evening: Mare Crisium, the Sea of Crises. It’s a small dark circle that’s not connected to any other dark features.

The Sea of Crises is a plain of volcanic rock that fills a big crater. The crater formed almost four billion years ago, when a giant asteroid slammed into the lunar surface. It blasted a hole almost 350 miles across, and several miles deep.

Later, magma bubbled up through cracks in the crater floor. As the magma cooled and hardened it formed a vast plain that bulges upward in the middle. Dense rock from the lunar mantle pushes up below that bulge, so the Moon’s gravitational pull is a little stronger there than in surrounding areas.

In 1976, a Soviet robotic lander brought back 170 grams of dirt from the Sea of Crises. The composition wasn’t what had been expected. That may be because the probe landed atop a ribbon of material blasted out of a nearby crater. So the only sample from the Sea of Crises may have come from deep below this prominent lunar feature.