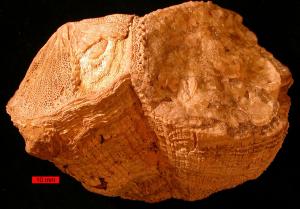 Growth rings in fossilized clams known as rudists, such as this one, record the changing length of Earth's day due to the gravitational interactions between Earth and the Moon. A recent study found that, near the end of the time of the dinosaurs, each year consisted of 372 days, which means a day was about 30 minutes shorter than it is now. Earlier studies had shown that the length of a day was even shorter in the more distant past. [Wilson 44691/Wikipedia]

If there just aren’t enough hours in the day for you, think of this: Earth’s day is longer now than it used to be. A recent study found that 70 million years ago, it was a half-hour shorter than it is now. And as you go even farther into the past, the day gets even shorter.

That’s because the tides act like a brake. As they race around the planet, they slosh against the land and the seafloor. That exerts a “push” against the solid planet, causing it to spin a little slower. At the same time, the tides are causing Earth and the Moon to move farther apart — by an inch and a half per year.

Researchers recently used lasers to count the growth rings in the fossils of a type of clam. The study showed that near the end of the reign of the dinosaurs, Earth rotated 372 times a year. In other words, a year consisted of 372 days. The length of a year hasn’t changed, so that means the length of a day has — it’s gotten a half hour longer.

Earlier studies, which used ancient coral and other fossils to look even farther into the past, extend that trend. 620 million years ago, for example, the year consisted of about 400 days. And 1.3 billion years ago, it was about 546 days. If that’s correct, then the length of a day then was just 16 hours.

And the process goes on. As the tides continue their ceaseless action, they’ll slow Earth down even more — adding some extra time to get things done.