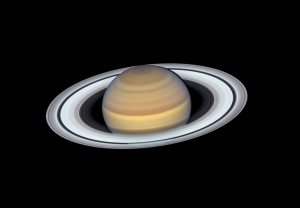 Saturn's rings shine brightly in this 2019 view from Hubble Space Telescope. The rings are still at a good angle as seen from Earth in 2020, making Saturn shine especially bright. The rings span about three-quarters of the distance from Earth to the Moon and consist of countless particles of ice, rock, and dust. [NASA/ESA/A. Simon (GSFC)/M.H. Wong (Univ. California, Berkeley)/OPAL Team]

If planets had feelings, then Saturn might have an inferiority complex. Although it’s a giant, it ranks second to Jupiter in just about every category. Jupiter is about 10 percent wider than Saturn, and about three times as heavy.

And as seen from Earth, Jupiter is much brighter. Right now, in fact, it’s easy to see that difference for yourself. The planets are close together, and they’re shining at or near their best for the whole year. They’re in the southeast as night falls. Jupiter is far brighter than any other planet or star in the sky for most of the night. Saturn is to its lower left. Although it pales in comparison to Jupiter, it’s quite bright on its own.

The one area where Saturn doesn’t lag behind Jupiter is rings. Jupiter is encircled by several rings. But they’re dark and thin, so they weren’t discovered until late in the last century.

Saturn’s rings, on the other hand, are wide and beautiful. They were visible from the first time anyone looked at the planet through a telescope. They span almost the distance between Earth and the Moon.

As Saturn orbits the Sun, we see the rings at different angles. Right now, they’re tilted at close to their best possible angle. That means they’re especially beautiful when seen through a telescope. And even without a telescope, they contribute a great deal to Saturn’s brightness — one way in which Saturn doesn’t have to feel inferior to any other planet.