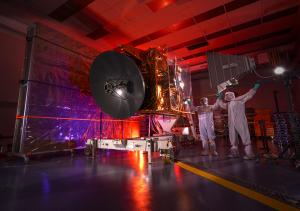 Engineers prepare Hope, the first Mars mission from the United Arab Emirates, for launch. The orbiter will study Martian weather and how the atmosphere leaks away into space. Bad weathr at the launch site in Japan has delayed launch until July 16. [MBRSC]

The United Arab Emirates has a lofty goal. It wants to have a settlement on Mars in less than a century. And it’s taking its first steps toward that goal. It’s working on a “Mars City” in the desert of Dubai. And it’s planning to launch its first mission to Mars as early as this week. The Hope orbiter would arrive at Mars early next year.

Assuming the coronavirus hasn’t scuttled any of them, it’s one of three missions to Mars scheduled for launch this month. The list includes an American rover and a Chinese orbiter-rover combo. A European mission was put off until the next launch window, in two years — not because of the virus, but because of nagging technical problems.

Hope will study the Martian atmosphere. Many orbiters always see the planet below at the same time of day — day in and day out. Hope, though, will see the full day-night cycle. That will allow it to see changes in the atmosphere that take place at various times of day.

And like several other orbiters, it’ll look at how Mars has lost its atmosphere. The early planet had a much warmer, thicker atmosphere than it does today. Most of that atmosphere has vanished. Some is locked in the Martian rocks and ice caps. But most of it leaked out into space. Hope should provide new evidence of how that happened, and how it’s still happening today — a first step toward the lofty goal of a settlement on Mars.

We’ll have more about the new missions to Mars tomorrow.