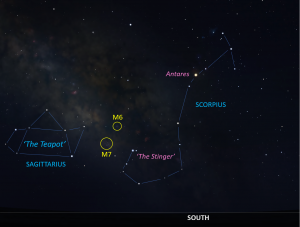 Scorpius and Sagittarius are two of the highlights of summer's evening skies. This view is a couple of hours after sunset on June 25, or a few minutes earlier on succeeding nights. A couple of prominent star clusters lurk near the scorpion's "stinger," and the glow of the Milky Way rises above the constellations. The center of the Milky Way Galaxy is in the "steam" above the spout of the teapot.

The scorpion packs a mighty sting — the two stars that mark its “stinger” are impressive.

Scorpius is low in the southern sky at nightfall, with its brightest star, Antares, near its middle. The tail curls to the lower left of Antares. It forms a hook, with the barbed stinger at the end.

The brighter of the stinger stars is Lambda Scorpii. It’s actually a system of three stars. Two of them are much more massive than the Sun, and thousands of times brighter. Both of them may be massive enough to end their lives with a bang — a supernova. And that could happen fairly soon. Both stars are nearing the ends of their “normal” lifetimes and are about to enter their final phases. Their explosive demises could happen within just a few million years.

Lambda Scorpii’s third star may be on the other end of the age scale — an infant that hasn’t yet settled into maturity. If that’s the case — and if it survives the supernova blasts — it will outlive its siblings by millions or billions of years.

Upsilon Scorpii forms the stinger’s tip. It’s 570 light-years away — about the same distance as Lambda. It’s probably a single star. It’s about 12,000 times brighter than the Sun. It’s a similar mass to the two older stars of Lambda. And like those stars, it, too, is likely to end its life as a supernova — adding a little more zing to the scorpion’s sting.

We’ll talk about some star clusters that are close to the stinger tomorrow.